How to create Dynamics AX 'keyboard shortcuts' e.g. hot keys for controls on a form

I'm back after taking a month off from blogging in May! Feels good to be back :-)

Some Microsoft Dynamics AX users need to be able to quickly do certain actions without touching their mouse. An example would be an order entry user who needs to enter hundreds of orders in a single day. Any efficiency to their process via the keyboard becomes critical. People will utilize thwa they call 'hotkeys', 'keyboard shortcuts', 'quick keys', etc

There is a way to access objects on an AX form via the keyboard. On any AX form, hit the 'ALT' key and you'll see little letter boxes pop up (dubbed 'KeyTips') which indicate which key needs to be hit to put the focus on that form control. Hitting 'Enter' on a highlighted keytip will mimic a click whether that triggers an action item, a drop down menu button, etc. If its a menu, you can use the arrow keys to navigate and hit enter.

You can have duplicate letters on a single form as there are only 26 in the alphabet :-). As an example of this, hitting 'S' in Figure 1 after pressing ALT will hide all non-'S' key tips and only show the three controls which are associated with the 'S' keytip. The first 'S' control will be highlighted. Subsequent hittings of the 'S' key will change the focus to the other S controls for the user to hit enter on.

TIP: Using these keyboard shortcuts with user by user layout changes in the IntelliMorph designer to achieve optimum results.

If'you have custom objects or a specific flow and would like to control what these values are, use the 'KeyTip' property on the form controls as seen in Figure 2 below

It's pretty powerful functionality. I've been able to fully create a sales order, change a number of key fields, add a few lines and release it to warehouse in an incredibly short amount of time. 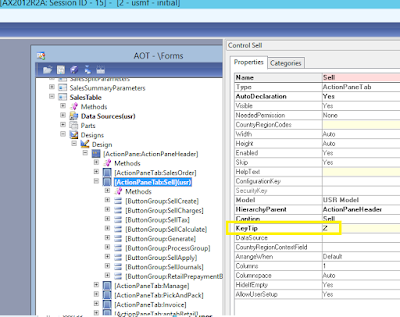