One of the most valuable tools to me as a consultant is Microsoft Paint. I will use Photoshop or GIMP (open source: https://www.gimp.org/) for more complex image creation/editing, but Paint is about 75% of my time.

MS added a new paint program called Paint 3D. Its being highlighted in the new 3D Holiday campaign so I thought I would check it out. There was always a rumor that Paint was going away and would be replaced by something new. Paint is not gone (nor heard rumor of it going away) but it is replaced by the equally capable and enhanced Paint 3D. It was released in Windows 10 Creator Addition sometime in Q2'17.

Paint 3D is a windows store app (.appx) so it'll have that look and feel. Its nice to have that native feel especially when using the pens in the Surface family. But it'll take a bit of time to get used to I think.

I haven't done much playing around with it yet outside of the below picture but it does appear to support transparent backgrounds and a (somewhat inaccurate) magic wand. There are predefined objects you can turn 3D as well as build in a 3 dimensional area.

There is a 3D model search capability built in which appears like a clip art-like place for 3D models. That'll be handy I think. And textures you can use in images right out of the gate.

I'll post more about this as I find more applications to use it for my work. This is part of what I want to learn in 2018. That and focus on VR/AR. How can this help with business processes and ERP consulting? Probably not much outside of sales and button images but who knows now with new applications and envisioning stores, displays, etc.

Here is what I made tinkering around with it. You can export things out in 3D or 2D. 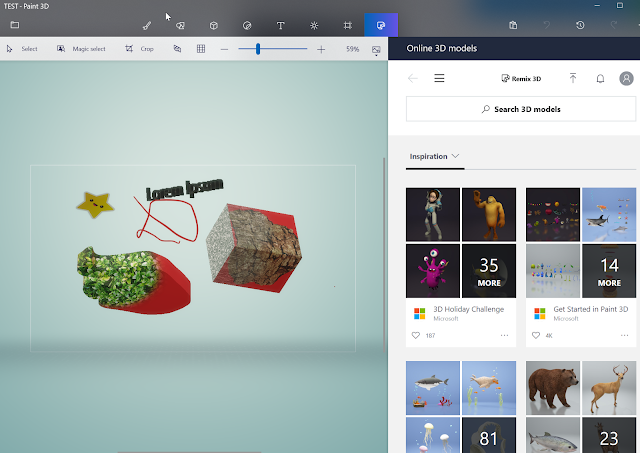