Designing an interface queue in AX:

When I create tables that are used in the interface to hold large strings of data (like a large blob or XML from external system or AX report), I put those fields in a separate table linking to the original 'metadata' table through a unique key.  This would make the typical one table interface turn into two tables: one to hold the metadata for the user and the other to hold the large files.
In using this design, there are many upsides but two primarily stick out that I would like to talk about:
The first is the obvious performance gain in the form used to manage the records in the interface.  When, for example, 20 records are retrieved from the database, records that do not contain an extremely large fields will come back faster.
The second is in regards to the maintenance.  A user may not need the data stored in the large fields after a few weeks but would still want to maintain the history of that data coming into the system.  To do this on a single table structure would require a cleanup job to specifically clear out the field holding the large data.  Doing this in a two table structure would allow the entire record to be deleted, but leave the original record in place.  A simple inner join between the two tables would show all records in those tables that still have the data in place.
Discuss your preferred way to do this below in the comments section...
at 1:20 AM No comments:

Improve Performance for slow retrieval of records in a grid

Sometimes there are forms that take a long time to load the data in a grid.  A common example of this would be for an AX interface where there is a grid that holds records in various statuses (e.g. Waiting, Error, Ended, etc) and carry data in the data source table that the user would normally not care about seeing (e.g. XML).
I generally would not include a large field on a table that is used in something like an interface.  I have recommendations for designing one in my blog post called "Recommendation in designing an interface queue in AX".
The following fix may not be the best option for addressing the issue as there are lots of factors that can affect performance, but this fixed it for me.  Its fixed the issues for me in a few instances that I've seen and have remained stable with no issues for over 3 years.
There is a property on a form's data source called 'OnlyFetchActive' that was able to resolve the problem for me.  I've included the exact information from MSDN to assist you in determining whether this could work for your issue. 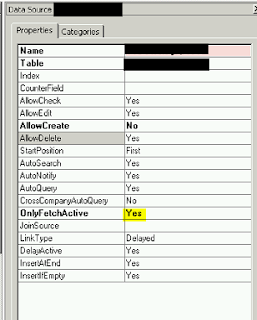 From MSDN AX 4.0 - Form Data Source Properties      "Determines whether all fields in the data source should be fetched, or only those that are used by controls on the form.
This property is designed to be used in lookup forms. There is no code in these forms, and they open more quickly because the result set is smaller.
When the OnlyFetchActive property has been set to Yes, records cannot be deleted from within the form. This is to preserve data integrity by ensuring that a delete operation is never attempted on incomplete records. If the user attempts to delete a record, an error message is issued."
at 11:52 PM No comments:

I recently encountered an issue where a code promotion was done from a staging environment to a production environment and, the next day, the AOS'es would all crash in both client and batch (server) mode when a process not relating to the code promotion (Invoicing) was run.  The code all compiled in PROD and everything was working great during all tests in lower environments.

The take away:
I normally compile forward when errors are received in the process being imported.  There were no errors on this import and the process in PROD was running fine during the weekend validation testing.

Hope that helps anyone hitting the same issue.
at 5:06 PM No comments:

Hit a display method violation I recently hit in AX 2009: 'Display methods must be typed ('VarString displayMethodName').  There wasn't anything online about this issue outside of MSDN documentation about the BP so I thought I would put this out there for whoever wants to read it.

Making this change to the display method will solve the issue.
at 1:01 AM 1 comment: