I think that harvesting social data to see what people are searching for in regards to a specific topic (e.g. Dynamics AX 7) can be very telling for what is going on and what people are interested in. One of the best ways IMO is to look at search engine suggestions with things like Bing and Google search suggestions. For those that don't know, search suggestions are the things that show up when you start typing in the search window of a search engine (Figure 1 below). 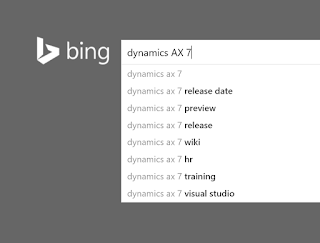 Below is a raw list of the search suggestions that I've compiled from various sources  in bold and added some commentary as to why people may be searching for them. Its obviously not THE reason for the searches but I'll try to add some insight into why I would be interested in that.

Note: As I'm a musician, I have to thrown this in bc I think of it everytime someone says AX 7. In your search results, if you don't say Dynamics, you may see references to Roland's AX-7 Keytar. (Figure 2) Its a keyboard that is held like a guitar, hence keytar. Its a popular one and the only one I've ever played. Yeah. Enjoy that.