'MaxBufferSize' is a system value for the Dynamics AX that may need to be adjusted to allow large queries or variables to be used. The adjustment becomes especially true when dealing with import/export of data in a single variable (like loading a large XML into an XML variable). It's primary use is to throw an error when a file or query falls outside of the 'expected max' value. This prevents the system from being brought to its knees from an unexpected scenario or file or query 'much' larger than expected. Very large report queries can draw an error triggered from this value as well.


In Dynamics versions AX 2009 and before, this setting was hidden in the depths of the registry. I streamlined changing this value via a job I posted in the below blog post: 'Insufficient Memory to Run Script - MaxBufferSize'. This was helpful for environments where changing registry values or restricted access was an issue.
I think the reason it was hidden was to prevent people from nonchalantly changing the maximum buffer size to something like 500MB in a matter of seconds. Navigating and changing a value in the registry makes people think a little harder about the consequences of changing a value.
Now in AX 2012, this parameter is available for everyone to use in the AX Server Configuration Utility. Users can change this value without crawling around in the registry but be very careful with changing this value from the default. Depending on application, it can be very useful to change this value quickly and may have little to no impact seen. In other applications, this can potentially take your system down to its knees by allowing a user to run something like a large query that will be 'too' large for the anticipated system load. 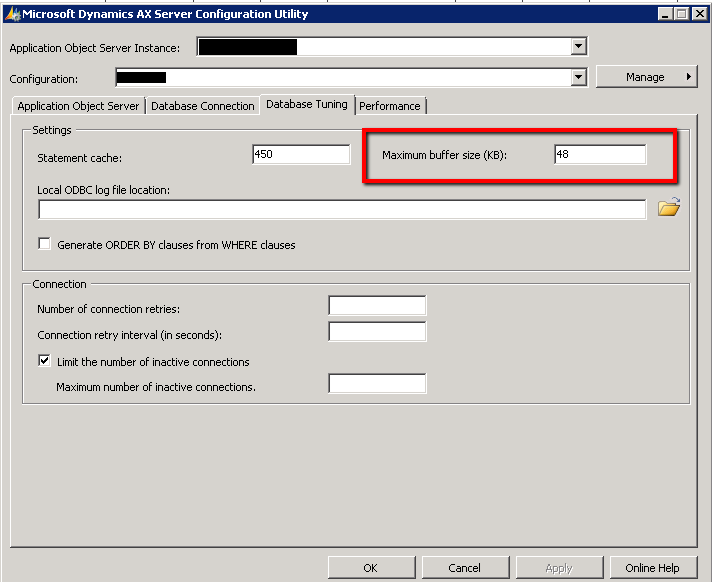