I've been asked about 'tricks' to increasing performance of AX instances. While there are several things that can be looked at, part of this to look at the server itself to see how things can be configured to make the machine itself run faster.

One super easy trick is to look at the Power Management setting on the server (Figure 1). If its set to 'Balanced', the server has known degradation issues. I first found this out here Microsoft Support - Degraded overall performance on Windows Server 2008 R2 back in late 2011.

By default, the 'Balanced' settings is used instead of 'High performance'. Why? Most computers will operate with highs and lows during the day instead of constantly being pegged at a high load. Windows Server dynamics performance scaling functionality is only active when in 'Balanced' so the power to performance ratio is optimized and is the 'greener' choice. As I understand, its a battle of efficiency vs being top of the game all the time and utilizing a lot of power unnecessarily. For a server like an AOS, I would almost always recommend 'High Performance. 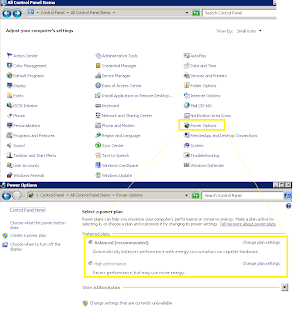