When I was trying to activate a cloud POS (CPOS) terminal, I was getting the error: 'Step 4: Creating Device Token failed' or something similar to that. I didn't take a screen shot of the image unfortunately. But it was similar to that.

The error is because the CPOS wasn't able to hit the AX '7' database. The CPOS uses a single AxDB database, in my case in the 'all in one' server, which the CPOS needs to have access to.

The environment was the AX 7 Update 1 using upgraded data from the AX 7 RTW release.

The Update 1 data changed in regards to some setup information. Event Viewer gave me some information into this essentially saying that the axruntimeuser wasn't able to access the DB. This, among other things, led me to believe the channel database setup was wrong.

Paste this value into the appropriate connection string (Figure 2). Mine was the 'Default' one. Run the 1070 job (I think that's the channel job... if not, run that one).

There were a few other random settings I had to change from RTW configs to update 1 but the above was the main one. I think there were only 3-4 other places.

Hopefully this helps someone else jump past this issue! 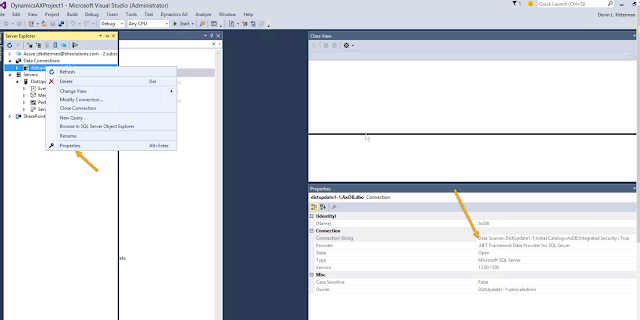